SPITAK IS RELEASED IN THE UNITED STATES

The film Spitak directed by Alexander Kott was released in Los Angeles on December 7, 2018 - on the day of the 30th anniversary of Spitak earthquake in Armenia. The premiere screening took place at the Laemmle cinema and the film was presented by it’s composer - the frontman of the System of a Down band Serj Tankian, joined by the actress Anna Tsukanova-Kott and producer Elena Glikman.
The the premiere was attended by Representatives of the Consulate General of Armenia in Los Angeles. A minute of silence in memory of the victims of the earthquake was announced before the film.

“Spitak” is a co-production of Russia and Armenia; the film is long-listed at the Best International Feature Film section of the Academy Awards.

On November 16, the film was also shown in the main section of the Fort Lauderdale International Film Festival (FLIFF). 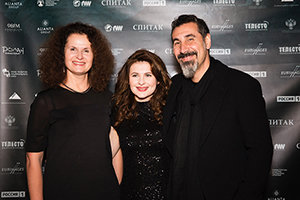