The filming of the feature film «Box» has been started on August 10 in Moscow.

The filming of the feature film «Box» by «Telesto» film company has been started on August 10 in Moscow.

The action of the film is set around the street football pitch that caused an adolescent conflict, but the same pitch finally unites the characters who love football. Street football tournament exacerbates relations between fathers and sons, and becomes a test of friendship and first love.

The film is written and directed by Edward Bordukov - a former athlete, a master of sports of international class (the higher sports rank in Russia). He wrote a script about what he knows and feels.

The film raises a very important and relevant topics for Russia: teenagers, sports, international conflicts, the issue of tolerance in society.

«Box» won the pitching of promising projects at «Kinotavr» film festival in 2014.

The legendary Moscow team of street art and graffiti «Zachem» was involved in the design of film locations. 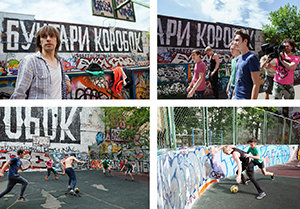