THE STORY BEHIND THE FILM POSTER

The Gulls has a beautiful poster that accompanies the film to Berlin. It is based on the Finish artist Helena Junttila’s painting A Windy Day.

«This is one of the most beautiful stories in my life. Three years ago, when writing the script to The Gulls, I happened to visit the Helsinki Kiasma Museum of Contemporary Art. Out of everything in the museum, one particular artist’s paintings spoke to me and sank deep into my soul - this was Helena Junttila’s work. It excited me so much that I immediately wanted to leave and ignore everything else. I simply could not contain myself, and suddenly I felt the power of my ancestry and my true nature. When I got back to Moscow, I would often flick through an album of her works. Helena always draws the exact same strange woman in a very specific state of mind, and it seemed to me as if I had long been familiar with with women, perhaps from a past life ... But it definitely wasn’t me, maybe my mother? I do not know.

As I mentioned, I was in the process of writing The Gulls script at the time of my acquaintance with Juntilla’s work, however I didn’t really connect the two together. It was only much later, when the image of the heroine Elsa had been decide on, I suddenly realised that this was HER, Helena’s woman. The painting became the main point of reference when searching for the lead actress; thanks to it we found the beautiful Zhenya Mandzhieva.

And then just recently I saw Helena’s new painting A Windy Day. It’s that of a gull flying over the head of the woman. Our film has a near identical shot in it, and I wouldn’t be surprised if they had been created at the same time.

I realised that Helena’s painting would be the ideal poster. All i had to do was obtain the authors’ consent, and so I plucked up the courage to write to Helena, telling her everything about the movie and this story. Luckily, she replied nearly straightaway, saw the trailer and gladly consented. And that’s how The Gulls got this poster. It seems such things don’t happen in real life - more like a dream come true». 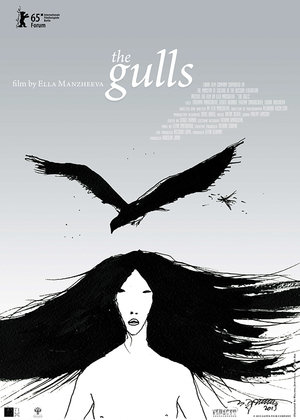