The director of the film SPITAK Alexander Kott received the Silver George Prize for the Best Director at the 40th Moscow International Film Festival (MIFF).

The film tells the story of devastated and largest in terms of the number of victims earthquake that took place in Armenia on December 7, 1988.

“Spitak” tells the story of Gor, who left Armenia in search of a better life but now returns back after an earthquake to find his family. But it’s too late. Everything is destroyed and he has to learn to love what he destroyed himself.

Attached is the photo of the producers of the film Spitak, Elena Glikman and Teresa Varzhapetyan, joined by director Alexander Kott and an actress Anna Tsukanova-Kott. Photo by Evgeny Smirnov. 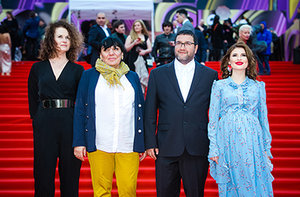