The "White Road!" project is up for the Atelier section of the Cinefondation program of the Cannes Film Festival

Mystical drama "White Road!" is a second common film of director Ella Manzheeva and producers Elena Glikman and Victoria Lupik. They've been previously working together on the film "The Gulls", which was a Berlinale participant and got the Best Debut award at Kinotavr Film Festival in 2015.

Being supported by ROSKINO, the "White Road!" took part in the Berlinale Residency program of the Berlin Film Festival (2015). The project also took part in virtual content market co-production pitching at Key Buyers Event: Digital Edition (2020), held by ROSKINO with the support of the Ministry of Culture of the Russian Federation.

The film has also been involved in the Baltic Event Co-production Market at the Industry@Tallinn & Baltic Event forum as a part of Russia in Focus section initiated by ROSKINO with the support of the Russian Cinema Fund.

Ella Manzheeva, the director: "White Road!" is a modern myth that will be familiar to everyone who has experienced in their life the loss of not only their loved ones, but the inner loss of themselves as well. It's kind of a road movie inside my subconscious, the memory of ancestors, defenders of the faith in front of social problems, spiritual poverty and hunger. This is a prayer for the salvation of the Égrégore of the victory of my people. Creating new worlds is a unique opportunity to talk about yourself. Sometimes words oversimplify the feelings, thoughts, or emotions that we experience. There are many ways and forms to express this unique energy of the author. And the process of cognition is much more important than the final result. This film is my own way. I've learned to be honest."

Victoria Lupik, the producer: "The idea of "White Road!" has been around for over 7 years. Through this time, we were constantly developing the project: we edited the script, looked for co-production partners, created a biography for the film. Even at the pre-production stage, the project is already known not only in our country, but in other countries as well, as we have taken part in the pitching sessions of several major film festivals. By now we already have a support of the Ministry of Culture of the Russian Federation, Mongolian and French co-producers and terms of production are already set. As a result, we submitted the film to several funds in search of additional funding. Now we need to find a sales agent and a distributor and develop the festival strategy. We hope that participation in L'Atelier will help us achieve these goals."

Elena Glikman, the producer: "White Road!" is the first Russian film in 15 years to be selected for L’Atelier. Films included in such programs acquire a high status, arouse the interest of the professional world community, and are in the lights of special attention of the press. I'm saying it with confidence, as we've had a similar experience with Ella Manzheeva's previous film "The Gulls", which has been a participant of several business programs – from pitching to works-in-progress. This helped the film to be selected for the Forum program of the Berlin Film Festival and contributed to its festival journey around the world: Karlovy Vary, Tallinn, Warsaw, Los Angeles, Brisbane, Edinburgh and many others. "The Gulls" had over 300 publications on the pages of the world mass media".

Evgenia Markova, head of ROSKINO: "The development of co-production is in focus of the state's attention in Russia today, with bunch of measures made to support such projects on a regular basis. Being supported by the Ministry of Culture of the Russian Federation, ROSKINO is actively developing the co-production education, attracting international experts. It should be noted that the Russian industry already has a number of successful projects created in co-production with international partners – these are universal stories that are understandable and interesting to the foreign audience. I'm sure that the "White Road!" has a great festival potential, and the film will find its audience." 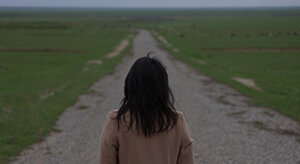