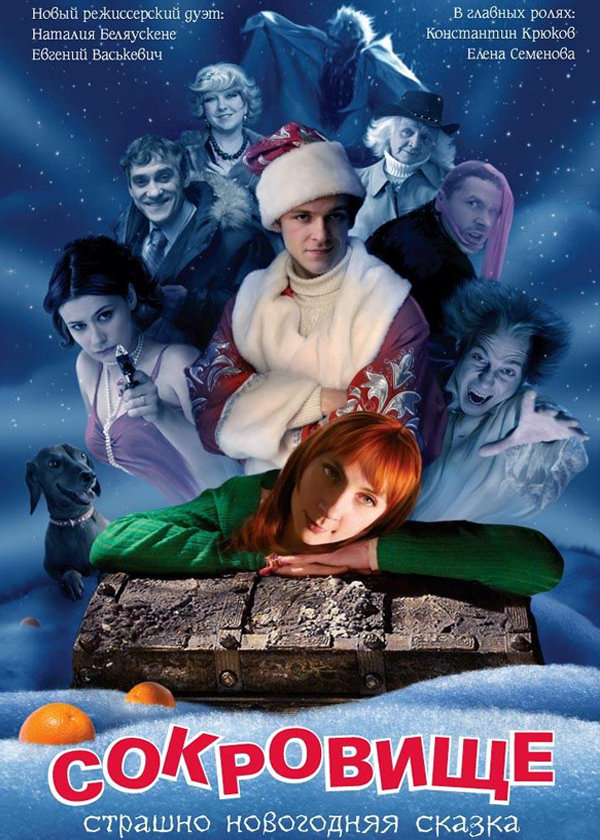 This Christmas fairytale is fun and very kind. Although it is visited by vampires and even ghosts, the story really isn’t scary, as our Vampire is afraid of blood, while the Ghost is too shy to scare anybody. The protagonist, a recent graduate who has decided to earn a little extra on New Year’s Eve by working as nighttime saleswoman, will go through many a hard challenge to miraculously acquire the Treasure and meet true love in the process. 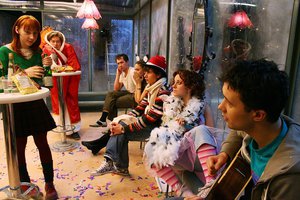 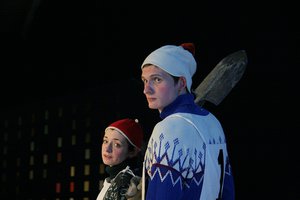 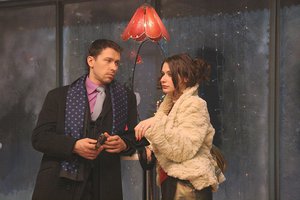 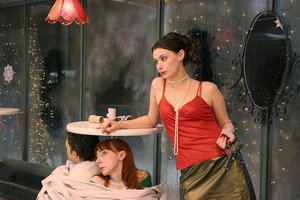 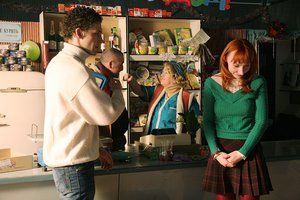 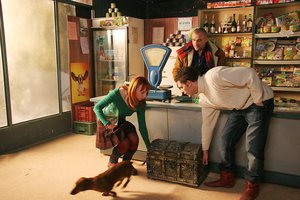 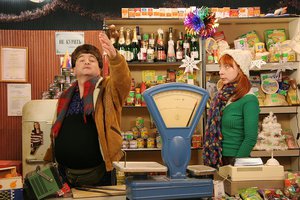 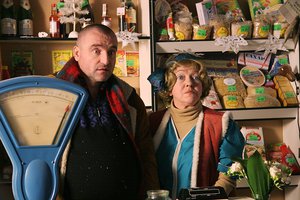 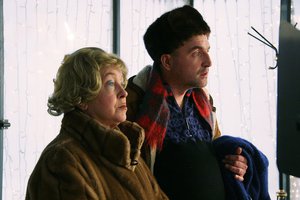 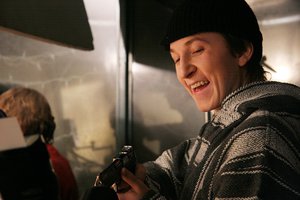 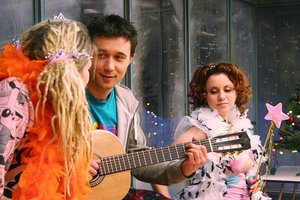 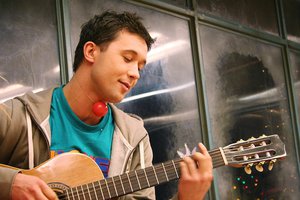 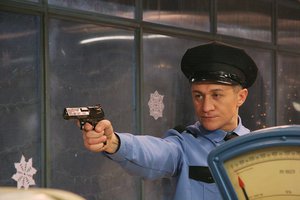 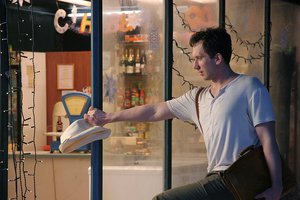 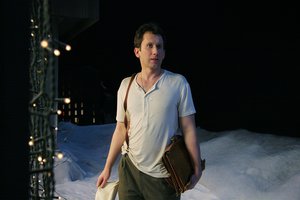 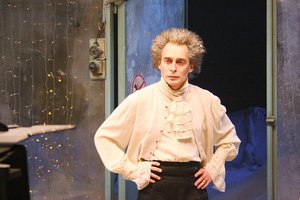 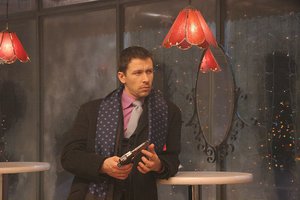 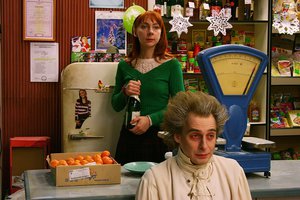 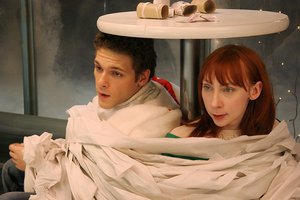 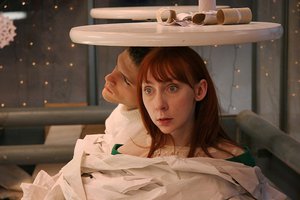 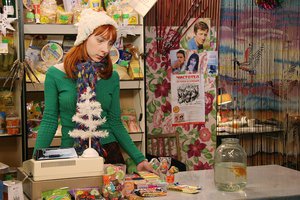 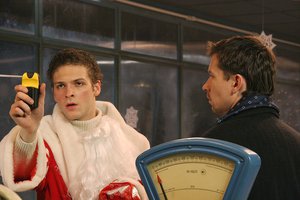 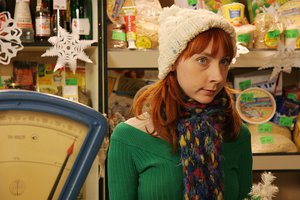 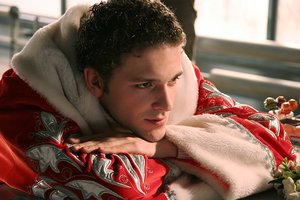 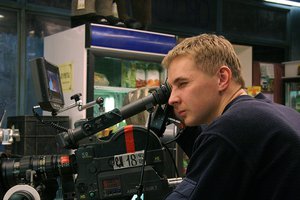 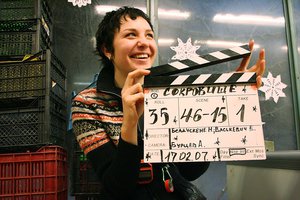 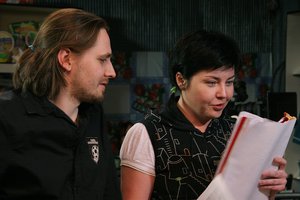 Making of the Movie

Winter in the pavilion

Filming began on February 4, but the Moscow winter wasn’t quite providing an abundance of snow. Outside was a mix of rain and slush, so our winter took place in one of the Mosfilm pavilions. We created the lush Christmas snow piles right inside of the pavilion using 15 tons of salt! But what kind of a New Year’s Eve is one without fabulous sparkling snowflakes falling from the sky? The fairytale was created by the workers sitting under the ceiling of the huge pavilion. At the command of the second director, they’d turn on the wind machine and very realistic snowflakes would start falling down. The producers followed the wishes of the directors and really went all out on the snow — as a result, the whole film crew and actors were permanently covered by a layer. Nobody objected to a few fluffy snowflakes in their hair, and only the actor Igor Larin had to shake them off now again. He played the role of the disembodied Ghost who, while wearing a hat and carrying a briefcase under his arm, cannot pick up a glass in his hand, but rather can easily pass through walls. So how could the snowflakes stay on the Ghost? Several times the scene even had to be reshot due to the directors noticed a few snowflakes on him.

Nearly all of the actors were involved in filming of the Celebrating New Year’s scene. The scene was filmed in the '25 hours' shop where the saleswoman Lena is visited by all her friends and where the Vampire and the Ghost also appear. The champagne was foaming, Sergey Babkin (Max) played his guitar and sang a song he composed specially for the film. In short, it was so much fun that the whole film crew wanted to join the actors. The shooting of the New Year’s celebrations took a while, and there wasn’t any time left to film the Ghost’s final phrase ‘Such good people', much to the distraught of the actor Igor Larin — ‘Why did the directors Natasha and Evgeniy cut my phrase out? After all, it was addressed to them as well — they are just as good people!'

The film also starred a number of animals. Here the main role was played by a dachshund named Hercules, whose real name is even funnier — Peas. Peas had an important and responsible role — throughout the whole movie he looked out for the heroine and warned her in case of danger. There was also a miniature dachshund on set who played Peas’s double. Peas became really matey with his double, and would often rush over to his new found friend as soon as seeing him on set. On set there were also two goldfishes living in an aquarium. They were filmed in turns, as the shot required a jar with only one fish in it. The fish constantly got mixed mixed up when being taken from the aquarium and put into the jar. As a result, we are pretty clueless as which fish ended up with more screen time: it’s even possible that one goldfish acted out the whole movie, while the other spent all its time resting in the aquarium.

Props as a source of inspiration

The movie’s main action takes place in the 25 Hours shop and, hence, the props on site were fitting — groceries. According to the script, the protagonist successfully sells a large amount of the groceries, and they gradually disappearing from the frame. However, in reality, the actress Lena Semenova, who was very nervous staring in her first lead role, simply used the props as a type of sedative. As she herself put it: ‘I utilised 3 Inspiration and 2 Alenka chocolates as well as 5 packs of crisps, all of which I had sold according to the plot, as a joy hormone; I did of course share all of this with other members of the cast. And tangerines as well, ten kilos or maybe more. It was hot in the pavilion and everyone was sorry to see how the tangerines spoil, so by the filming was wrapped up there were non left…'

On the last day of filming, the Kievsky railway station square was cordoned off with … Christmas tinsel, as the red and white tape designated for this purpose had mysteriously disappeared. We were filming one of the very first scenes. An orchestra of Santa Clauses — dressed up Pan-Quartet musicians — lined up in front of the Evropeyskiy shopping mall; they were accompanied by three Snow Maiden playing the comb and singing a rousing Christmas song in some gibberish language, amongst the words of which you could just about make out words such as Bom-Bom, Chocolates and Champagne. A crowd quickly gathered. The musicians were doing such a great job, that soon passersby started throwing money into the cello case. A armful of colourful balloons was tied to accordion one of the musicians. During a break in filming, one of Santa Clauses — the one with the accordion — went down to the subway to warm up. And that’s when the balloons came undone and ended up stuck under the ceiling — just as it was time to shoot the scene with the balloons! You should have seen the commotion. A ladder was found, but it turned out to be too short — nobody could reach the balloons. Finally, a cleaner’s broom was borrowed and the balloons were taken down and tied to the accordion with a double knot. One balloon, however, did manage to get away …

When the filming was completed, all the actors and crew were presented with ‘New Year’s gifts' as a little souvenir from the shoot: black and white bags with pink hearts, filled up with salt, i. e. snow from the site. This is what the actress Elena Semenova remembers from the shoot: ‘During the filming there was a general atmosphere of childish joy and fun. On set I met people close in spirit. I tend to appreciate people with whom you can laugh freely. And laugh we did, constantly, — after all, we were filming a comedy, a fairy tale, and everyone was in a somewhat fairytale New Year's mood … "